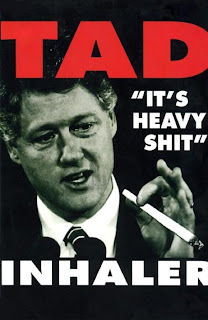 Fun fact: the above image, a tour poster for the wonderful TAD, so offended their record label that they were promptly dropped when executives learned of it.

It's that time of year again, wherein we honor those valiant souls who served--and some who died in the service of--as the Commander-in-Chief of the United States of America. You may not like whoever is in office, but the office itself is worthy of respect. Here are some musical tributes I think you will enjoy: